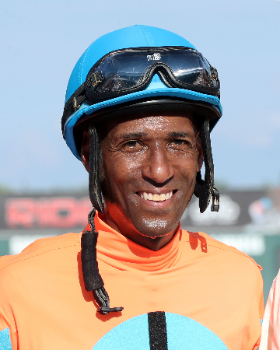 Created in 1989, the New York Racing Association’s Mike Venezia Memorial Award is awarded to a jockey who displays the extraordinary sportsmanship and citizenship that personified Venezia, who died as the result of injuries suffered in a spill in 1988.

The 2021 winner is veteran jockey DeShawn Parker, who was honored September 2, 2021 at Saratoga Race Course in a ceremony attended by the Venezia family and past award winners, Richard Migliore and Hall of Famer Ramon Dominguez.

Parker, based at Indiana Grand, was chosen in ballots cast by more than 360 professional jockeys at North American tracks. He outpolled a distinguished group of finalists including Junior Alvarado, Julien Leparoux, Scott Stevens and Gerard Melancon.

“It’s an honor just to be on the ballot for this award,” said Parker. “It’s extra special that my fellow riders are the ones who made the selection. I take a lot of pride in being a role model both on and off the track. I will l cherish this award.”

Winning the Venezia Award is another major accomplishment for Parker in a year he described as “personally emotional but exciting.” In early March, Parker lost his father, Daryl Parker, a longtime Ohio racing steward, to cancer. Parker called his father his mentor and inspiration for becoming a jockey, especially after telling his 5-foot-10-inch  son to ignore the naysayers who said he was too tall to make it as a professional rider.

“My idol, my best friend and a great father!” Parker said of his father. “He meant so much to my life and my career. I can only hope to be as great as he was.”

Two weeks after the passing of his father, Parker was selected by a vote of jockeys nationwide as the winner of the 2021 George Woolf Memorial Jockey Award, presented by Santa Anita Park.

The Venezia Memorial Award is a 13-inch  bronze sculpture with a title that reads, "The Jockey, A Champion." Parker has joined  a legendary group of riders who have won the award previously, including Venezia, who posthumously earned the inaugural award in 1989, as well as Migliore, Domiguez, Bill Shoemaker, Angel Cordero, Jr., Jerry Bailey, Mike Smith, Gary Stevens, Edgar Prado, Joe Bravo and Javier Castellano.

For Migliore, the 2003 Venezia Memorial Award winner who is now with NYRA TV, the award continues the legacy of Venezia.

“Winning the award myself was one the proudest moments of my career because Mike Venezia embodied everything you look for in a rider,” said Migliore. “He continues to be an example for today’s jockeys and for our sport. DeShawn Parker is a worthy addition to this group of jockeys.”