Let’s Go To The Movies

From the big-budget tear-jerkers of the 1930s and ‘40s to documentaries and films about champion horses, the Sport of Kings has inspired the hearts and minds of filmmakers and actors for generations. Rating the top movies about horse racing is about as exact a science as handicapping the races—inspiring many a late-night debate among horseplayers. Here are some racing films, listed chronologically, to get you through the days when you can’t make it to Belmont Park: 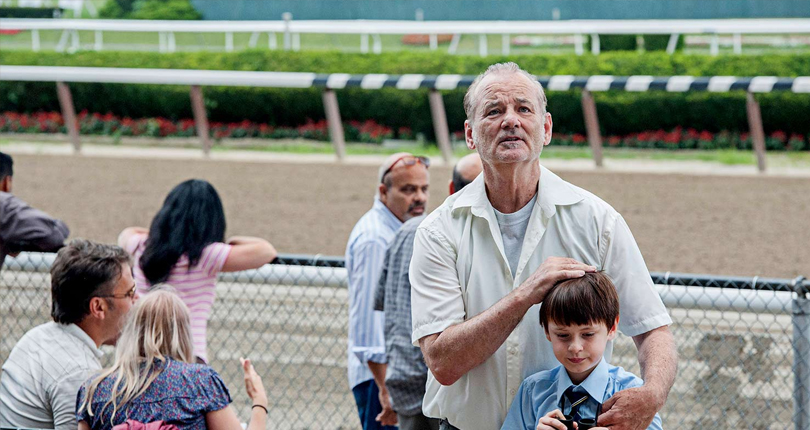 St. Vincent (2014): That man pictured in June 2013 at the rail of Belmont Park looks a lot like Bill Murray. Wait, it is Bill Murray, who plays the title role as a raffish neighbor of an 11-year-boy played by Dario Barosso to whom he becomes an unlikely mentor. The film is written and directed by Theo¬dore Melfi, and also stars Melissa McCarthy, Naomi Watts and Chris O’Dowd. 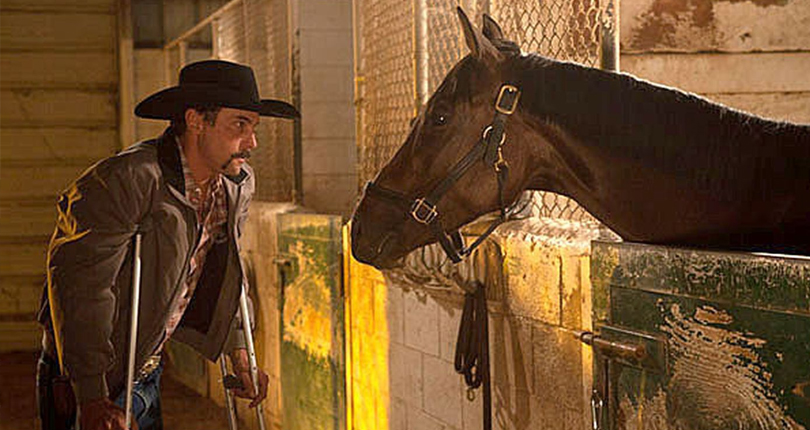 50-1 (2014): The title refers to the long odds of Mine That Bird, who rider Calvin Borel engineered to an improbable victory in the 2009 Kentucky Derby. Starring Skeet Ulrich as trainer Chip Woolley, Christian Kane as co-owner Mark Allen and Borel as himself, the film follows the 21-hour mishap-heavy journey of Mine that Bird and his connections from their off-the-beaten-track training base in New Mexico to Churchill Downs. Pay attention to Boral’s masterful ground-saving, rail-skimming strategy, the same he used in his 2007 Derby triumph on Street Sense. 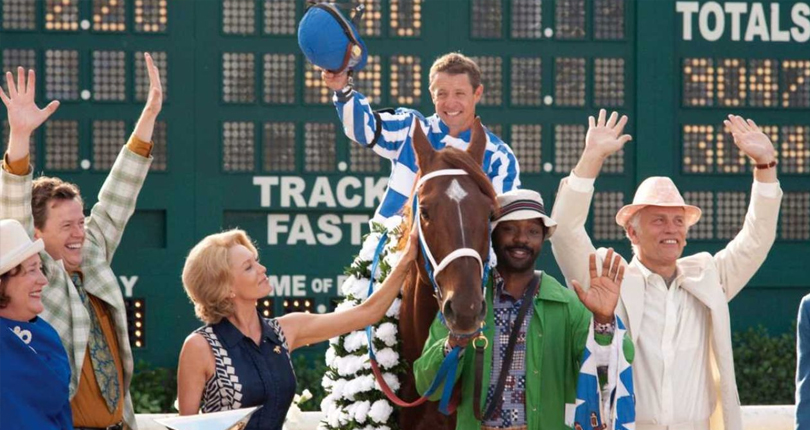 Secretariat (2010): Some loved it; others not so much. Starring Diane Lane as Secretariat’s owner, Penny Chenery, and John Malkovich as his trainer, Lucien Laurin, this Disney film chronicles the story of the 1973 Triple Crown winner, one that race fans know well. If you overlook a few factual errors and the inevitability of Secretariat’s run to history, the racing scenes are still enough to make this one worth seeing. 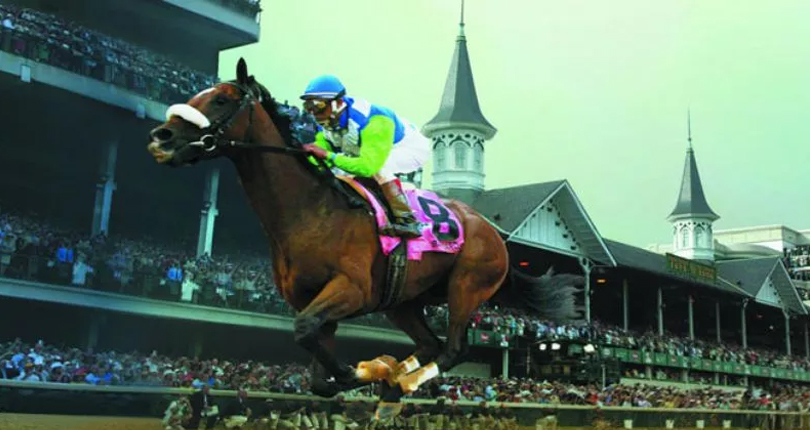 The First Saturday in May (2007): Brad and John Hennegan follow six trainers on the unpredictable and high-stakes journeys of their top horses leading to the 2005 Kentucky Derby. There is joy in this documentary. There is heartbreak and some pathos as well. And most of all, there are memorable portraits of the trainers and their families—and a searing look at the drive and sacrifice it takes to reach racing’s holy grail. 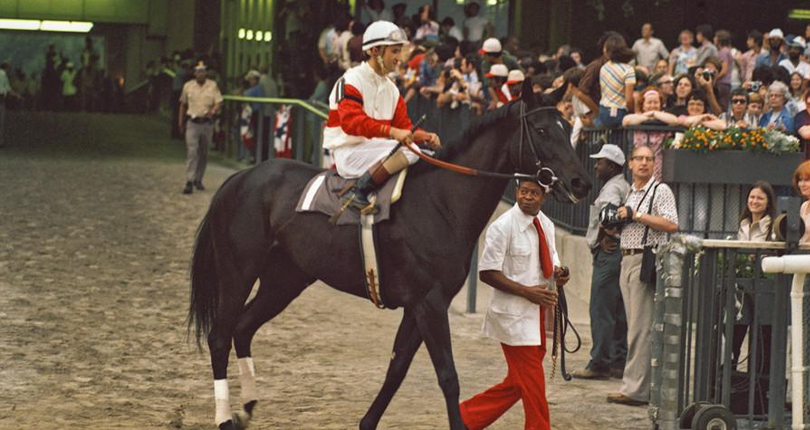 Ruffian (2007): Academy Award nominee Sam Shepard stars in the true story of the filly, Ruffian. Undefeated in her first 10 races, Ruffian is on her way to becoming one of the most successful fillies in horse racing history when, well, that gives away the story. Shepard plays trainer Frank Whiteley as he moves Ruffian toward a big showdown against Kentucky Derby winner Foolish Pleasure in a mid-1970s’ battle of the sexes. 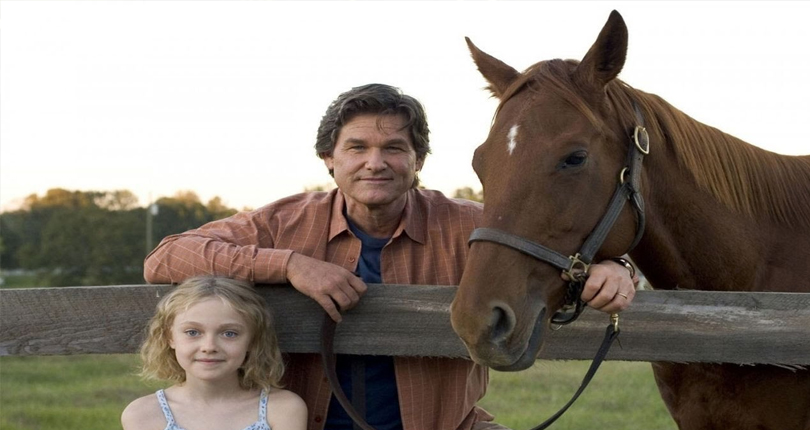 Dreamer (2005): Helping to nurse an injured filly to health is a heavyweight cast including Kurt Russell, Dakota Fanning, Kris Kristofferson and Elisabeth Shue. They succeed, and along the way, work through their own issues, namely a strained father/daughter relationship. This is a film for racing fans and the whole family. 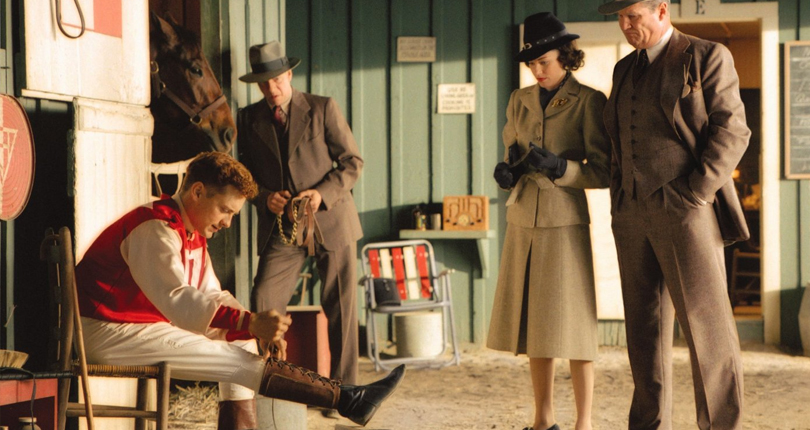 Seabiscuit (2003): Sure, there are omissions in this tale of the Depression-era horse that “could.” But the story of how this horse helped his jockey, owner and trainer overcome the odds and their troubles is beautifully filled and acted. Staring Tobey Maguire as jockey Red Pollard, and Jeff Bridges as owner Charles Howard and a truly revelatory performance by Gary Stevens as George “The Iceman” Woolf, the film earned seven Academy Award nominations. Filmed in part at Saratoga, the film is based on Laura Hillenbrand’s best-selling 2001 book, Seabiscuit: An American Legend. 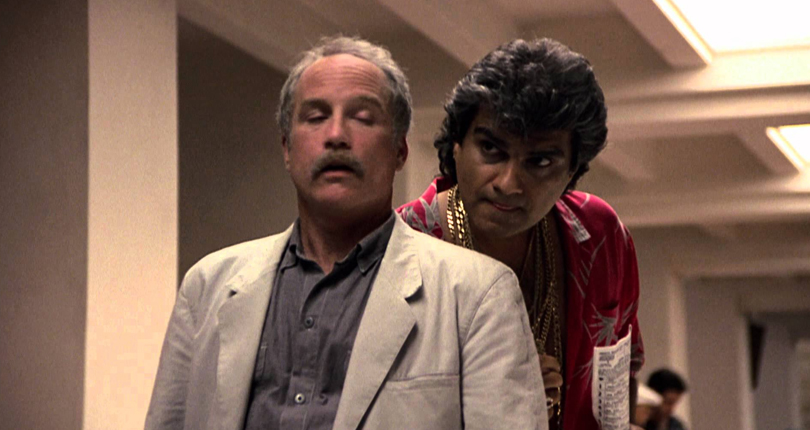 Let It Ride (1989): Richard Dreyfuss is a frustrated horseplayer who lives the dream by inexplicably winning every bet he places in a magical day at Hialeah. Sure, it’s a fantasy, but it’s chock full of colorful scenes that capture a part of horse racing to which anyone who has ever spent $2 at the mutuel window can relate. 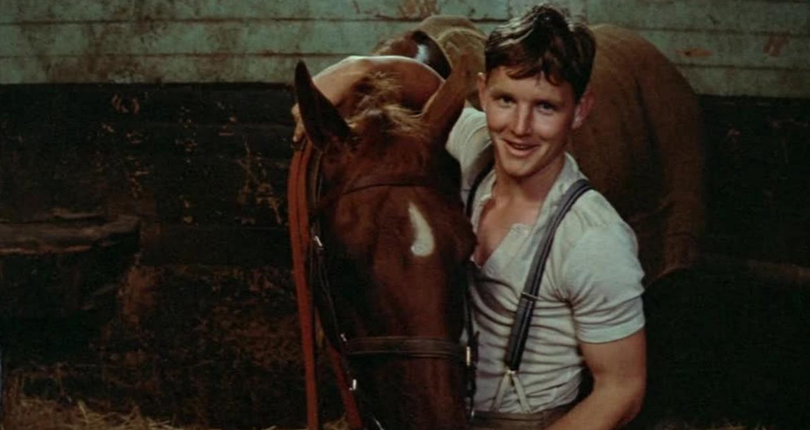 Phar Lap (1983): Lauded as one of the most historically accurate and well filmed portrayals of a champion thoroughbred, Phar Lap tells the story of the “Man o’ War of Australia.” Everything about this iconic racehorse sparkles in this film from Phar Lap’s rise from obscurity to lift the hopes of millions during the Great Depression to his career in America and relationship with handler Tommy Woodcock. Despite the mystery of his death, Phar Lap’s name remains etched in racing history. 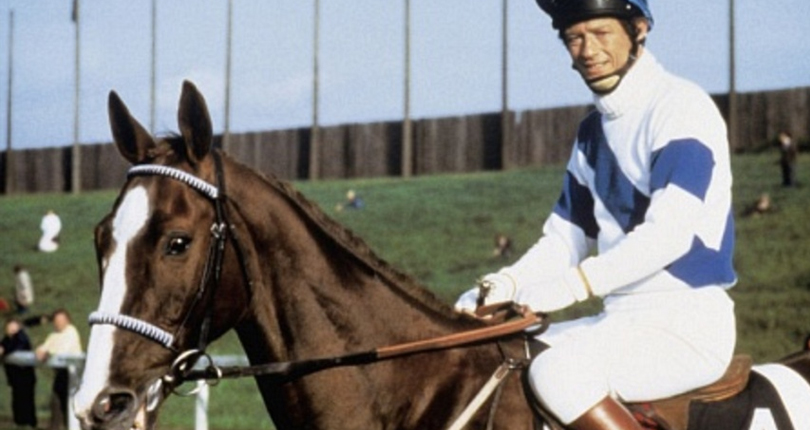 Champions (1983): The emotional story of jockey Bob Champion, played by John Hurt, who recovers from cancer to take Europe’s Grand National aboard Aldaniti, is guaranteed to generate goose bumps and even a few sniffles. 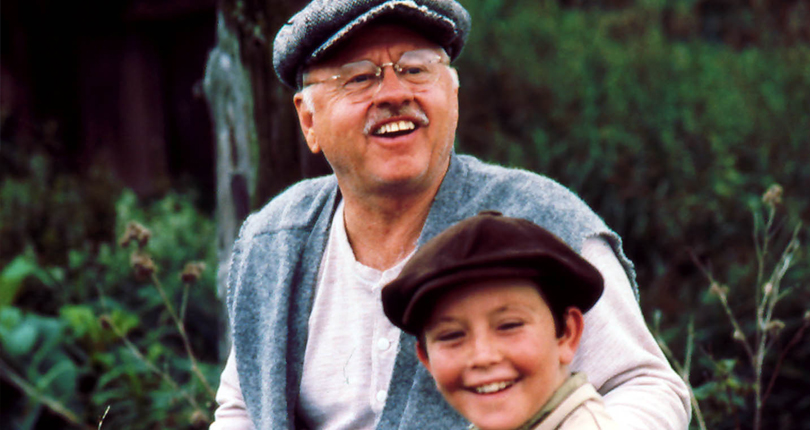 The Black Stallion (1979): Based on Walter Farley’s 1941 children’s novel of the same title, the film is the story of a young boy who is shipwrecked and saved by a wild Arabian stallion with whom he forges an indelible bond and rides to victory in a big match. The cinematography is memorable. So is Mickey Rooney’s performance as a retired jockey for which he earned an Oscar nomination. 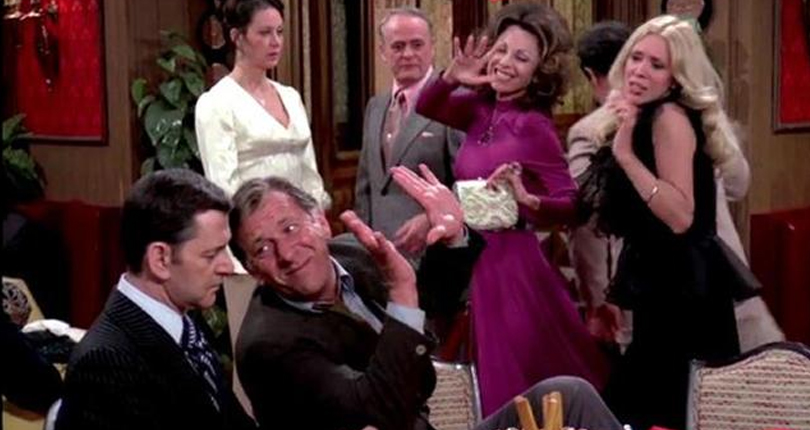 Felix the Horse Player (1975): Okay, this one isn’t a film, but we can’t help slipping in this cult episode from the late, great television show, The Odd Couple, which was filmed at both Belmont Park and Aqueduct. Tony Randall plays Felix. Oscar is Jack Klugman, who in real life was a horse owner and often found at NYRA tracks. 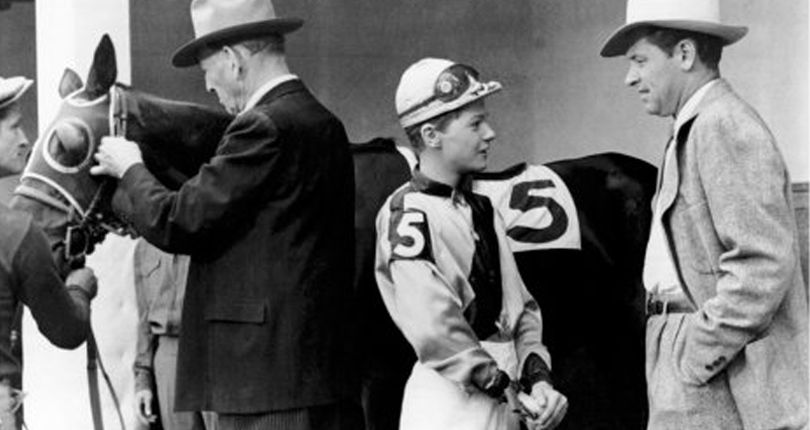 Boots Malone (1952): William Holden is a down-on-his-luck agent who mentors a rich runaway named Johnny Stewart, played by Thomas Gibson, Jr., who wants to become a jockey. Sit back and enjoy the parade of trainers, riders, agents and racetrackers who form a penetrating and realistic portrait at the world of racing in its era. 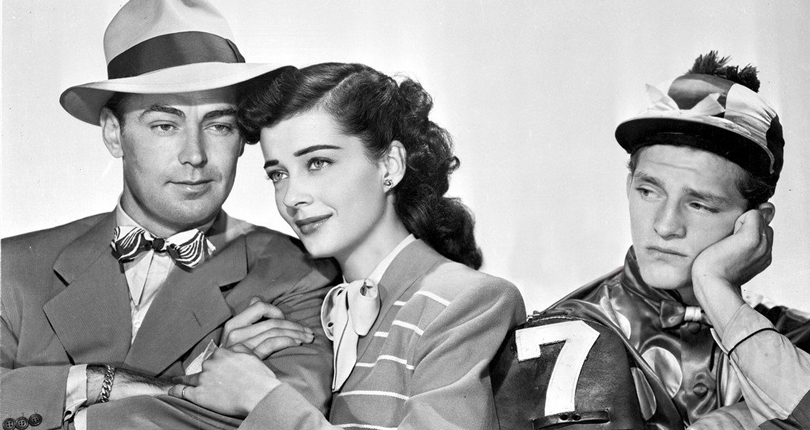 Salty O’Rourke (1945): Alan Ladd is small-time gambler Salty O’Rourke, who needs money fast to pay off a debt, so he buys a racehorse named Whipper to see if he can turn it into an instant winner. The only one who believes in the horse is banned jockey Johnny Cates (Stanley Clements), who takes an assumed identity to ride. 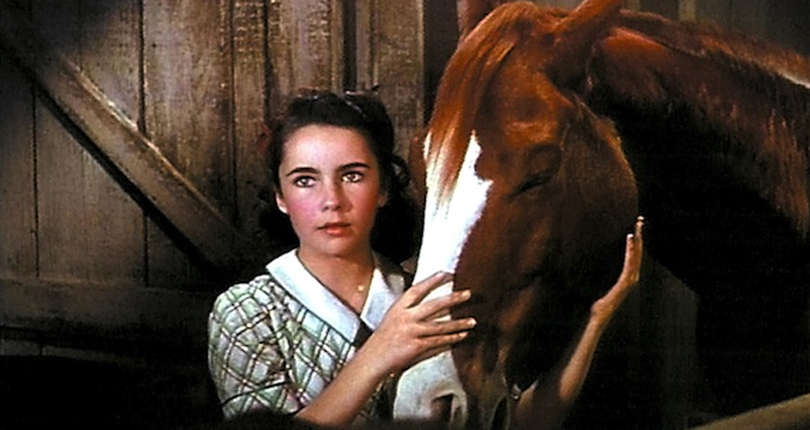 National Velvet (1944): Starring 12-year-old Elizabeth Taylor who believes her troublesome horse has enough talent to win the Grand National Steeplechase, this is the film that made millions of girls horse-crazy. Also starring Mickey Rooney and Donald Crisp, National Velvet is a classic, preserved in the U.S. National Film Registry by the Library of Congress as “culturally, historically, or aesthetically significant.” 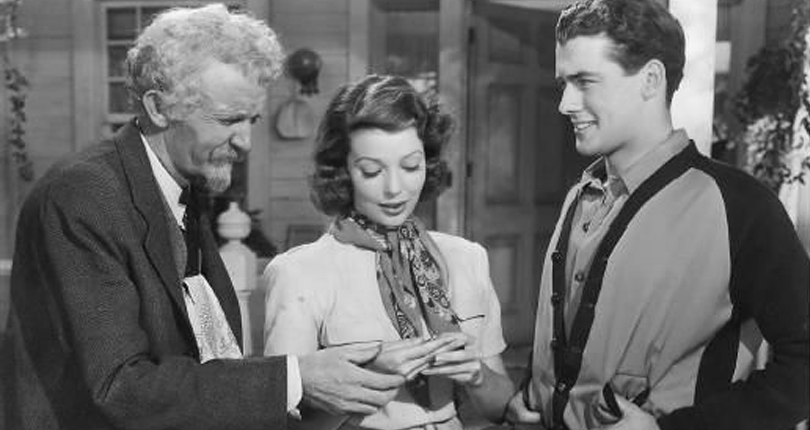 Kentucky (1938): In what turf writer Steve Haskin calls “the granddaddy of all racing films,” this technicolor classic features a Romeo and Juliet plot that follows a post-Civil War feud in a family who also breed and race thoroughbreds. Walter Brennan, who plays an elderly breeder and owner, won an Academy Award for his performance. The film includes remarkable footage of Man o’ War and Gallant Fox in retirement and shots of Eddie Arcaro winning his first Kentucky Derby aboard Lawrin. 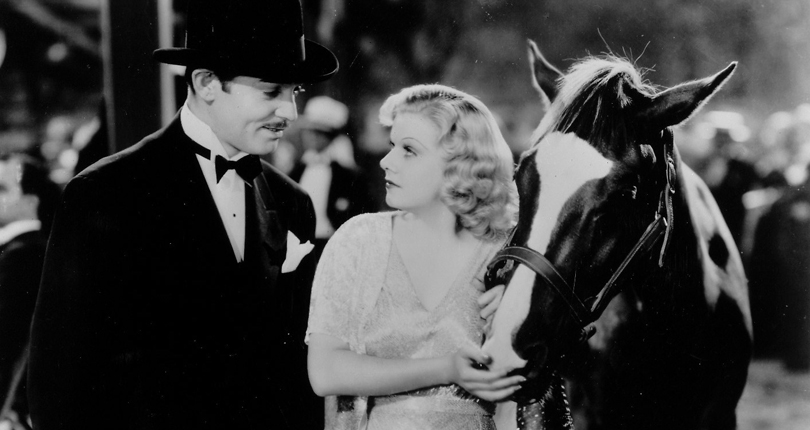 Saratoga (1937): It’s hard to resist a movie about racing starring a couple of Hollywood legends, Clark Gable and Jean Harlow, with scenes filmed at Saratoga Race Course. Gable and Harlow were box-office magic in their day, but with the film nearly complete, Harlow collapsed on the set and died a week later. Completed using stands-ins for Harlow, the film became a hit anyway. 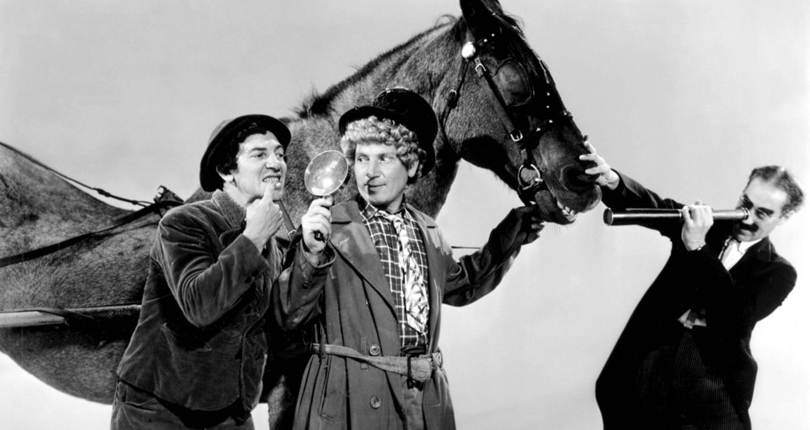 A Day at the Races (1937): Groucho Marx is Dr. Hugo Z. Hackenbush, a veterinarian and chief of staff at Standish Sanitarium. Chico Marx is Tony, a sanitarium employee who would rather be at the track. And Harpo is Stuffy, a jockey. But the plot hardly matters; what does is another Marx Brothers film, their seventh, with laugh-out-loud humor, a lot of which takes place at the track. Don’t miss Groucho and Chico at the mutuel window and Harpo’s epic steeplechase ride on a horse named Hi-Hat.