Belmont Park honors its past. Reminders of its illustrious 114-year history are here, there and just about everywhere around the spacious grounds. So in between the races, do yourself a favor and see if you can spot some of these noticeable—and not-so-noticeable—features that commemorate this temple of racing:

Outside Gates: At the Clubhouse entrance, Gate #5, on Hempstead Turnpike stand four imposing stone pillars, which during most of the 19th century were a part of Washington Course of the South Carolina Jockey Club in Charleston, S.C. When August Belmont II offered to purchase the gates for Belmont Park after Washington Course closed, the Mayor and Park Commissioners of the City of Charleston presented them as a gift. 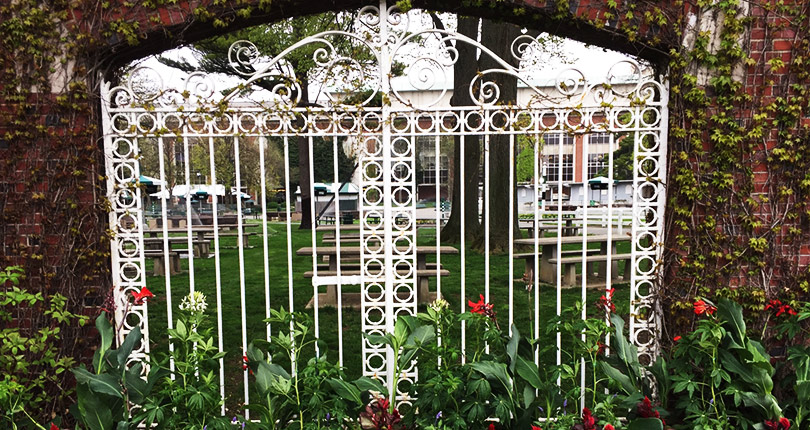 The White Gate: Follow the perimeter of the grounds facing Hempstead Turnpike and you’ll find a stunning white gate, preserved from the original Belmont Park. The gate is outlined by ivy-covered brick and has flowers planted at its base. 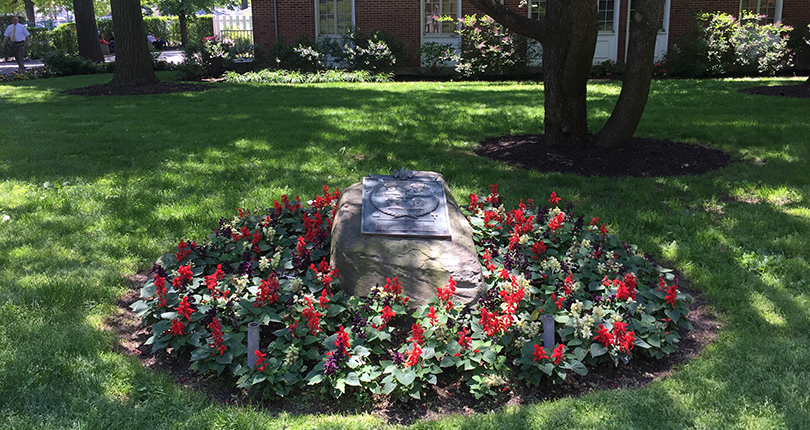 Chaplains’ Rock: Chiseled into a boulder-sized rock on the walkway between the racing office and the Clubhouse is a plaque that honors four chaplains who were among the 672 Americans who perished in the World War II sinking of the Dorchester by a German torpedo attack in the north Atlantic. 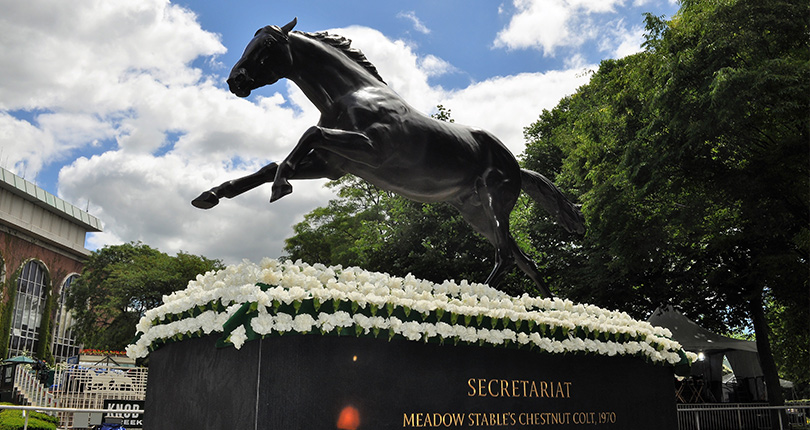 Best Ever? Head to the Paddock where a magnificent bronze statue honors one of the greatest of all thoroughbreds, the 1973 Triple Crown winner Secretariat. The statue is a 1988 copy of John Skeaping’s 1974 original, which was commissioned by Paul Mellon and is on display at the National Museum of Racing in Saratoga. 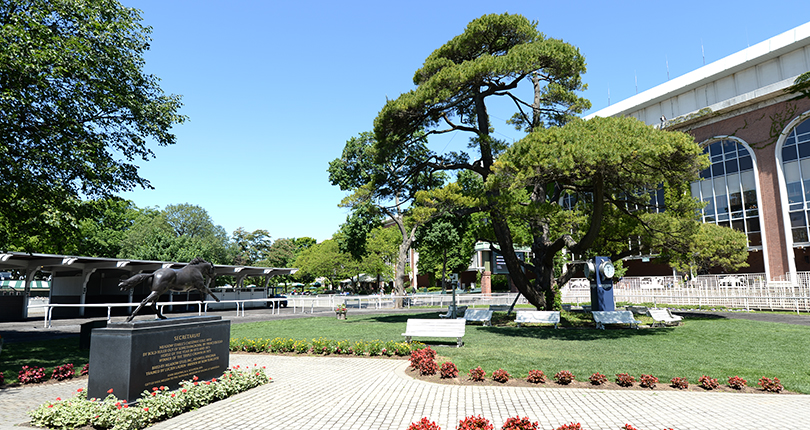 The White Pine: The stunning Japanese White Pine that shades the Paddock may look familiar: It was officially incorporated into the official Belmont Park logo in 1968, the year the new grandstand opened. For all its significance, no one knows the exact age of the tree. According to a 1968 NYRA historical publication, it was planted in 1826, long before Belmont ark was even a twinkle in August Belmont II’s eye. During the track’s reconstruction in the mid-1960s, the tree was allegedly marked for destruction but again escaped the axe and has remained a dominant and cherished part of the Paddock landscape ever since. 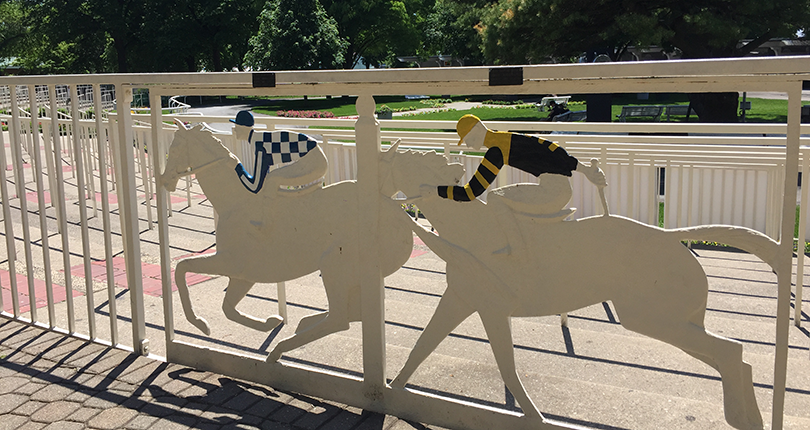 Wrought Iron: While at the Paddock, consider taking 10 minutes—or 15—to explore the intricate wrought-iron racing designs of its outer fence. Look closely to the fence nearest the Grandstand and you’ll notice that 12 of the jockey-and-horse designs are painted to commemorate the stable colors of Triple Crown winners. The railings, used as decoration on the south side of the old Belmont Park Grandstand, were salvaged during the mid-1960s renovation of the building and grounds. 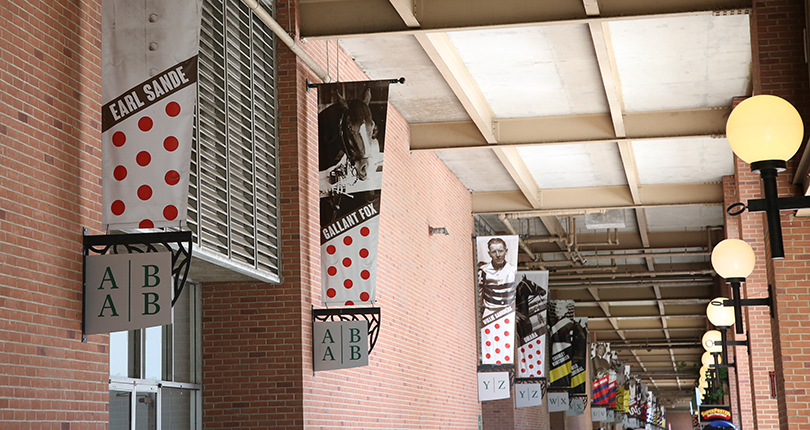 Banners: Take a stroll along the outside walkway of the Grandstand to see another Triple Crown commemoration—24 8½-by-3½-foot banners of the winning horses and jockeys, 13 each, adorned with the stable colors. So why are there 13 banners for jockeys but only 11 winning riders? Hall of Famer Eddie Arcaro, the only rider to win two Triple Crowns, in 1941 aboard Whirlaway and in 1948 on Citation, appears on a pair of banners. 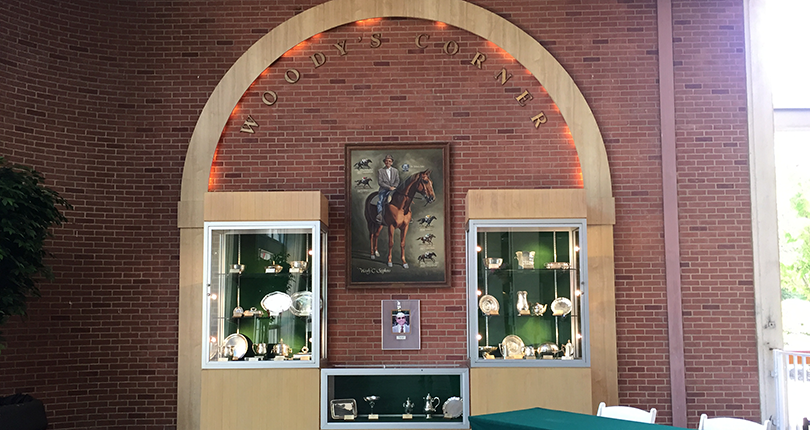 Woody’s Corner: Danzig Connection’s victory in the 1986 Belmont Stakes capped a streak for the ages: It was trainer Woody Stephens’ fifth consecutive victory in the “Test of the Champion.” The Hall of Famer’s legacy is celebrated by “Woody’s Corner,” a display just inside Belmont Park’s main Clubhouse entrance, where you can admire Stephens’ trophies as well as a painting that depicts the trainer aboard his pony, Rex, surrounded by images of his five Belmont winners. Stephens died at age 84 in 1998; he is honored in another way as well, today’s running of the Grade 2 Woody Stephens Stakes for 3-year-olds at seven furlongs. 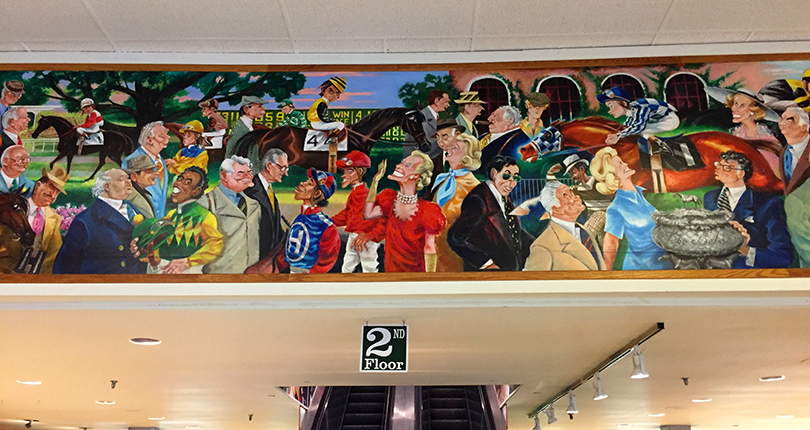 Mural, Mural On the Wall: Head to the second level of the Clubhouse and gaze upward to the area above the escalator to the third floor for look at a massive mural by the French artist Pierre Bellocq, known as “Peb,” which takes a comic look at many of Belmont Park’s dominant owners, jockeys, trainers and racing personalities through the years.

Old Days: A few feet from “Peb,” trackside, on the Clubhouse walls running along the walls of both mutuel bays and a good chunk of the Trophy Room is more artwork: a series of 19 murals depicting the old Belmont Park. Painted in the late 1930s by W. Stewart Archibald, the murals once donned the walls of the old Track Tavern on Springfield Boulevard in Queens Village. In 1974, the bar was sold and its owners, Mr. and Mrs. John D. Campbell, donated the murals to Belmont Park. 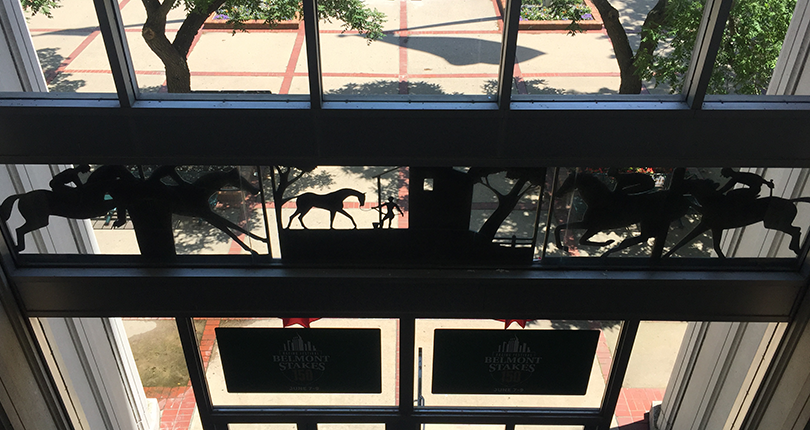 Inside Gates: While on the second level of the Clubhouse head from the murals to the area overlooking the front entrance and gaze away from the track for a view of a set of wrought-iron gates, another holdover of the original track. Two horse silhouettes top the curvy, floral design of the century-old gates.

Jackie, Oh! On the fourth floor of the Clubhouse are a series of framed black-and-white photos taken of stylish guests at Belmont Park in the 1930s, ’40s and ’50s. Among the most intriguing of these photos, on the wall by the elevator bank, is of a young girl, not quite 10, who is seated on the railing on Memorial Day 1939. Look closely: Dressed in a sun dress and bonnet, she is Jacqueline Bouvier, later an accomplished horsewoman, and the First Lady of the United States. 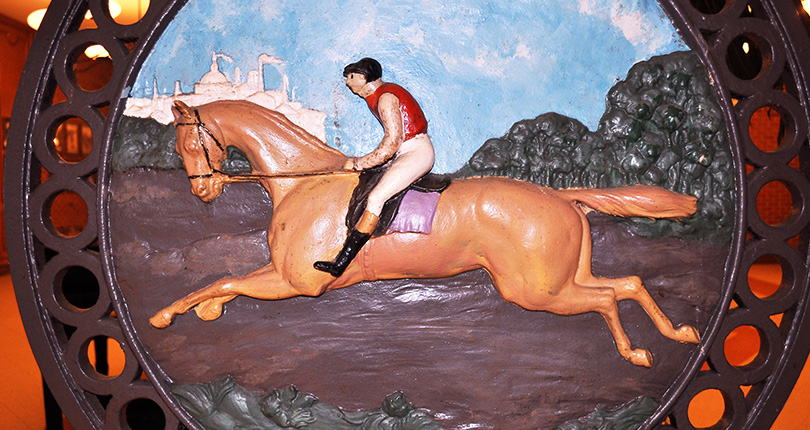 More Gates: The exquisitely detailed wrought iron gates of the late, great Jerome Park Racetrack in the Bronx, are preserved on the fourth floor of the Belmont Park Clubhouse, at the entrance to the Garden Terrace Restaurant. In 1937, the gates bearing an illustration of the first Belmont Stakes, which was held at Jerome Park in 1867—were donated to the track by August Belmont II’s son, Perry Belmont. 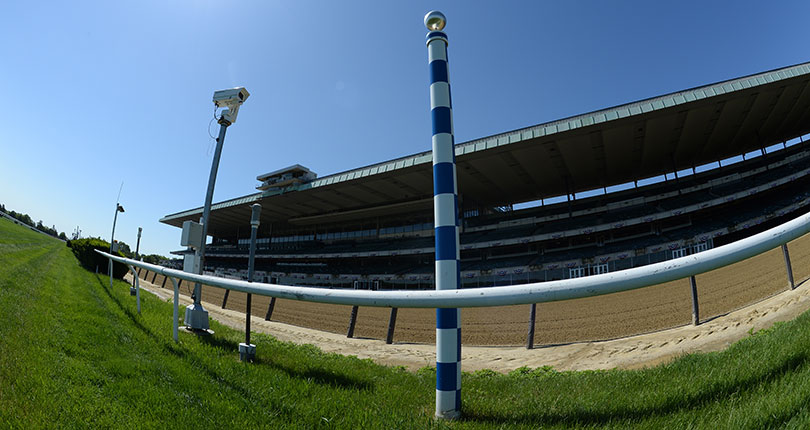 Big Red Redux: Facing the track, turn your eye to a spot exactly 31½ lengths short of the finish line—where just inside the railing, you’ll see a striped blue-and-white pole. It the “Secretariat Pole,” which marks the margin of Secretariat’s smashing victory in the 1973 Belmont Stakes to earn the Triple Crown. Retired NYRA Race Caller Tom Durkin came up the idea in 2013 to commemorate the 40th anniversary of the horse known as “Big Red,” whose racing colors are represented by the pole. 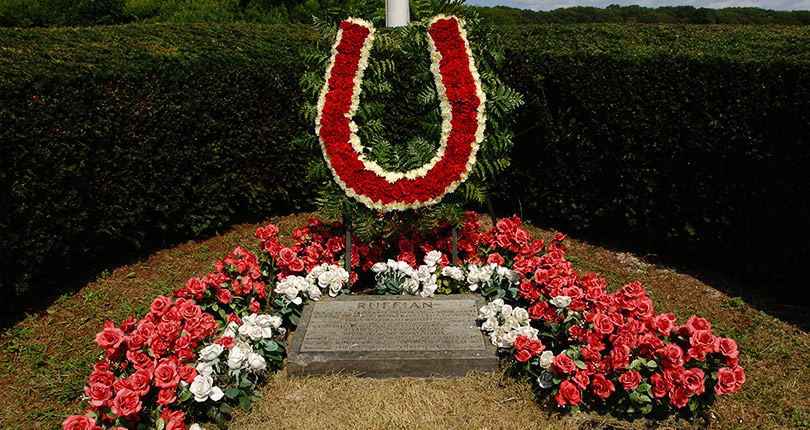 Remembering Ruffian: How appropriate that the flowers in the small bed at the foot of the infield flagpole near the finish line are in the shape of a horseshoe. The small garden marks the burial site of the great filly Ruffian whose life ended tragically in 1975 in a match race at Belmont Park against that year’s Kentucky Derby winner Foolish Pleasure. Few who saw the sleek bay filly, bred and owned by Stuart and Barbara Janney and trained by Frank Whiteley, Jr., will ever forget her: The winner of all 10 races she finished, Ruffian set a new record in each of the eight stakes races she won. 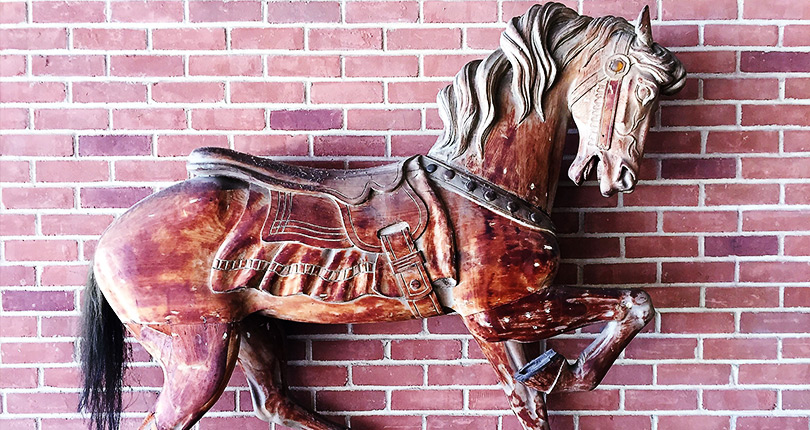 Horse of a Different Color: Those striking carousel horses on the walls of the Garden Terrace Restaurant date to the early 20th century. Carved by Marcus Illions, known as the “Master Carver,” the carousel horses were a part of Kaydeross Amusement Park in Saratoga. But when the park closed in 1987, several were brought to Belmont Park. 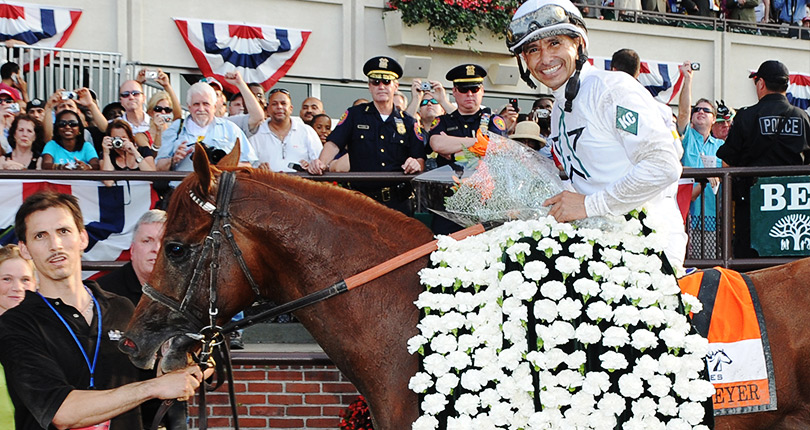 Flowers for the Winner: The stunning 40-pound blanket of white carnations that drapes the winner of Belmont Stakes in the Winner’s Circle is one of the most memorable sights of The Test of the Champion. To create the blanket, NYRA’s Floral and Landscape team spends several days before the Belmont Stakes gluing the approximately 700 imported carnations in staggered rows to seven yards of green velvet cloth, folded and sewn to give the heft to retain its shape. The team also creates created a second blanket of white carnations for the Secretariat statue in the Paddock; and pink, yellow and red blankets for some of today’s other winners of stakes’ races on Belmont Stakes’ Day. 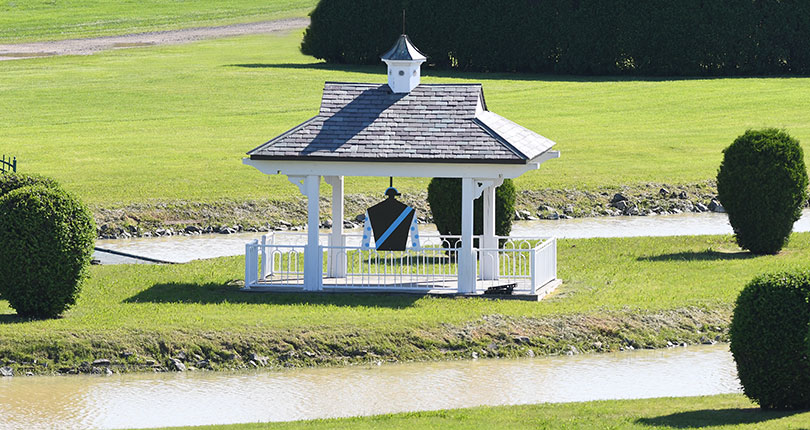 Hail to the Champ: From the flagpole, run your eye a furlong or so to the right to find a white gazebo in which a wooden cutout of the jockey silks features the colors of the owners of the most recent Belmont Stakes. Shortly after the Belmont Stakes ends, Paul Ferris gets to work painting the cutout of the colors of winning owners, which goes on display in the gazebo for a year.